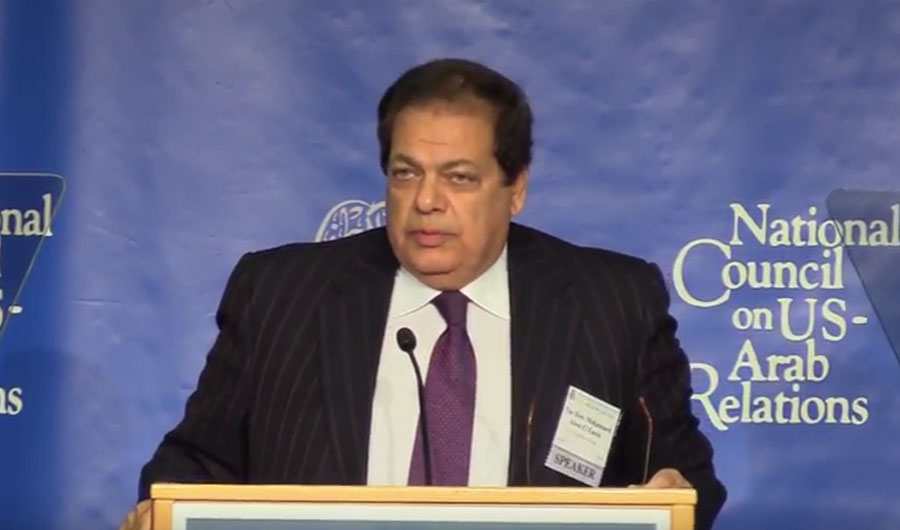 Mr. Mohammed Abou El Enein, President of the Egyptian European Council and Honorary President of the Euro-Mediterranean Parliamentary Assembly, made great efforts to clarify the true picture and the comprehensive situation in Egypt of Egypt in the international circles by virtue of his positions. He proposed solutions for the regional situations and conflicts in neighboring countries. The efforts paid by Mr. Abou El Enein in the Arab-U.S. Policymakers Conference in Washington are the best proof.

In this regard, he stressed the importance for the international community to extinguish fires in the Middle East, as we have seen confrontations between the international and regional powers and proxy wars in many countries of the region, which led to innocent civilians’ bloodshed.

This came during his speech before the 25th. Annual Arab-U.S. Policymakers Conference, organized by the National Council on US-Arab Relations in Washington DC, and attended prominent political and military figures in the world.

In his speech in the conference, Mr. Abou El Enein stressed the importance of the Middle East region and the need to find political solutions to its crises.

He warned that the situation in the region is dreadful and requires more attention and vigilance, as any country in the world is not in isolation from threats that have become extra-territorial. Terrorism hit Paris, Brussels and New York, despite the fact that those cities have been touted for a long time as being safe areas.

He added that there are many questions that can be directed to the new US administration: What can the new US Administration offer to the Middle East? Will it become safer, more stable and more prosperous? Will it be able to make real efforts to stop bloodshed in the Middle East? Is it possible for the new US administration to learn from past experiences that have caused heavy economic losses and severe damage to the security and cohesion of the people of the region and the American people as well? Will it make diplomatic efforts to find a solution to crisis in Iraq, Libya, Syria and Yemen?

Mr. Abou El Enein wondered: “Does the new Administration have the will to put an end to the stalemate that prevented from reaching a solution to the Palestinian-Israeli conflict? Can we develop together a global strategy to defeat terrorism? Will next US administration to provide plans and programs for economic partnership that could increase the volume of trade exchange, promote investment and encourage reform? Will it respect the will and wishes of all peoples, including the people of the Middle East, with the abandonment of interference in the internal affairs of those peoples, especially that they still fighting their battles against terrorism?”

Mr. Abou El Enein went on asking: “Will the new US administration appreciate the importance of the call of President Abdel Fattah al-Sisi for Muslim Scholars and Al-Azhar for the renewal of religious discourse and counter extremist ideology and the distorted interpretations of the tolerance of Islam?

He concluded by saying: “Certainly the answer to those questions will have a great impact on the Arab-US relations”.

Mr. Abou El Enein emphasized that the Egyptians are working to build a civilian modern state based on democracy and rule of law, provides equal rights for citizens and respects human rights and freedom of expression.

He said that Egypt regained its security and political stability, thanks to its people and strong institutions, pointing out that Egypt is moving on the right path to economic recovery and restoring its position as the cradle of civilization.

He noted that President Abdel Fattah El-Sisi launched Egypt’s vision for 2030, targeting a sustainable development plan to build a new Egypt with a competitive market capable of becoming one of the best 30 Economies in the world, improving human development, achieving an annual growth rate of 12% and doubling per capita income.

He added that within a few days, a new investment law will be issued. It includes non-traditional incentives for foreign and local companies, allowing easy transfer of profits within 3 months, providing tax exemptions of up to 10 years and the land free of charge, as well as 50% reduction on energy prices, as well as many other incentives.

Mr. Abou El Enein stressed that The United States is the largest trading partner of Egypt and one of the largest foreign investors. There are many success stories of US companies in Egypt, which did not withdraw from the Egyptian market despite the political changes witnessed by the country during the past six years.

He added that the promotion of trade represents the future plan for Egypt. Thus, we can achieve further strategic and economic partnership, and to shift from aid to trade. Egypt can become a center for US companies that want to invest in industry, agriculture, high technology, services and energy. The products can be produced in Egypt and duty-free exported to the markets of 1.6 billion consumers in the Arab region, Africa and Europe, based on the trade agreements signed with those areas.

He noted that Egypt has achieved remarkable success in cooperation with major American and European companies such as Siemens, British Petroleum (BP), Eni, General Electric, Microsoft and Apache.

As a member of the US-Egypt Presidential Council, Mr. Abou El Enein said that he believes that the time has come to establish a Free Trade Zone between Egypt and the United States, especially that this issue was negotiated about many years ago. He stressed that Egypt can achieve a high rate of growth and attract more investments. He added that Egypt has a strategic location attractive for investors, as it occupies a unique position on international trade and service lines.

He said that mega-projects in the Suez Canal area is the largest of its kind in the world, where 17 thousand ships pass annually, wondering whether the US administration intends to establish specialized industries in the Suez Canal economic zone, which would make this area a focal point for US companies in Egypt?

Mr. Abou El Enein pointed out that the US-Egyptian relations went through periods of tension, but they crossed these periods. He invited the conference participants to come to Egypt to see the situation closely. In addition, he asked the conference participants to inform their advisers, economists, investors, teachers and students to follow up the situation in Egypt closely, adding that he is confident and optimistic that the relations between Egypt and the United States will remain very strong in the future.

In the same context, Mr. Abou El Enein said that what happened in Syria, Libya, Iraq and Yemen is not accepted, as no one can accept watching news of murder, war and destruction on daily basis. In addition, he outlined the challenges currently facing Egypt, as well as issues concerning the Arab-US relations and the US role in the settlement of crises in the region.

He warned that the situation in the region is dreadful and requires more attention and vigilance, as any country in the world is not in isolation from threats that have become extra-territorial. Terrorism hit Paris, Brussels and New York, despite the fact that those cities have been touted for a long time as being safe areas.

Finally, Mr. Abou El Enein stressed the importance of the Middle East region and the need to find political solutions to its crises. In addition, he outlined the challenges currently facing Egypt, as well as issues concerning the Arab-US relations and the US role in the settlement of crises in the region.